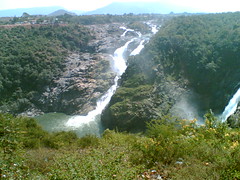 It is a 4 km deviation from the route to Kollegal from Bangalore (Via Kanakapura). The waterfall is 98 m tall, and has a maximum recorded flow of 667,000 cubic feet per sec. One of Asia’s oldest hydro-electric power station, still functional, is located at the waterfall. This spectacular waterfall is surrounded by hill forests of the Cauvery Wildlife Sanctuary. It’s really a nice place to visit.