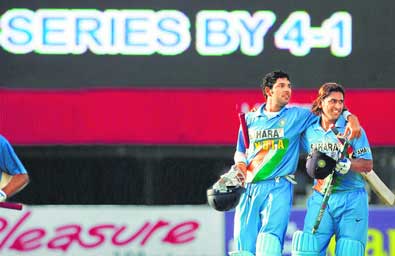 On the fine day of 19th Feb India won the Hutch Cup by defeating Pakistan in 4 out of 5 matches. This was really a great match, those who missed it are really unlucky. The killer Mahendra Singh Dhoni was simply awesome and the Touch’em’all guy Yuvraj Singh played a fine inning. Dhoni scored 4s and 6s like it was an meteoroid shower in the end of the match whereas Yuvraj showed his great temperament by staying on the wicket for a longer time only to put some concrete in the base of this win, he was 107 not out. Overall it was a nice high adrenalin action to watch.

Yeah, but this series was not like what Indo-Pak cricket used to be, not less than a war. Didn’t get a chance to see blood in boys’ eyes. Anyway we won… yay…

Well the hindi doesn’t look like it worked out well on the comments, but here it is in english :

You have a great blog too! Thanks for visiting, now we have to chase the English away after defeating them. At least the Pakistanis admitted that we played better than them, the English usually make excuses about the weather, the food, the crowd…

Yeah you are right Ranjit… The Britons have already started finding reasons… ;)…