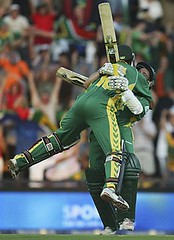 South African Cricket Team won the Historical Match and the Series by defeating Australia in the Last and final match at New Wanderers Stadium, Johannesburg. Australia scored 434 playing first breaking SriLankan record of highest score in One Day Cricket and South Africa broke this record also by scoring 438 and beating Ausies. This was an absolutely extraordinary match. No one could even dream of beating such a high score. With the shower of Fours and Sixes both teams proved that Cricket is still a game of uncertainty and it will ever be the same.