Kanchan Gupta a former PMO official has written a story for The Pioneer and it is bleeding the truth about Dec 25, 1999 when world’s Biggest Democracy became a frenzy of headless chickens. 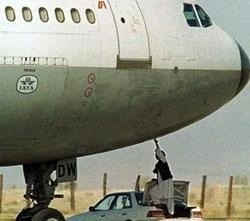 Could the Kandahar episode have ended any other way? Were an Indian aircraft to be hijacked again, would we respond any differently? Not really. As a nation we do not have the guts to stand up to terrorism. We cannot take hits and suffer casualties. We start counting our dead even before a battle has been won or lost. We make a great show of honouring those who die on the battlefield and lionise brave hearts of history, but we do not want our children to follow in their footsteps.

An excellent example of mentally weak society who does not bother about anything but about themselves. I know everyone will say I am saying this because none of my relatives were onboard but I should say now what I think.

We tend to forget, main problem, we always have a tendency to flow with the tail wind behind, so if everyone says ‘yes’ I say ‘yes’ and otherwise

All that we talk about “look at the spirit of Bangalore/Ahmedabad/Jaipur/Mumbai/Still counting…, that we have come alive even after the blasts/hijacks/killing/still counting…” Its all utter bullshit(excuse!). All we care is okay I am good, my family is good so why should I BOTHER

Well Said Hemant. We need to fight, we need another freedom struggle, we need people who fought for us back before 1947 when we achieved independence. There is some utter bullshit (excuse me) going on in our Bharat right now, we have to stop it.

People here are living just for themselves, nobody thinks about what people did years ago to bring laughter on their kids’ face, we need a revolution here to fulfill our forefathers’ dreams of new India.

‘nuf said, didn’t want to write on this, but still.